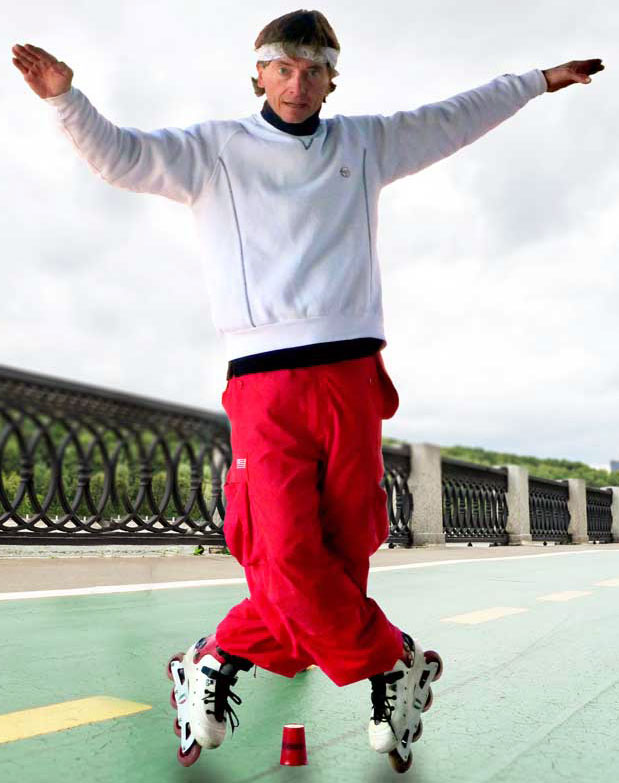 Among the founders of Styleslalom, he was one of the best international inline skaters.

Creator of numerous steps, including those he called Flowers of Ala and Mabrouk, laid the foundations of a new discipline in skating, regularly recognized by the FIHP (Italian Skating Federation), which quickly spread worldwide, called Styleslalom. By introducing the technical vocabulary, the terminology of the various figures, and assigning the names to the steps, he defined the rules of the first competitions from which those of the subsequent and current competitions were further developed.

Many are his national and international victories in the second half of the 90s, (2nd at the International contest in Lausanne in ’96 and ’97 and 1st in ’98, 1st at the Roller Cup Contest in Padua in ’96, ‘ 97, of Milan in ’97 and of Monza in ’98, 1st in Rollermania ’97, 1st in the Moon Skater Contest ’97 …) and also a lot of appearances in shows and exhibitions even at an international level (about a hundred only in ‘ 96). He collaborated with sector magazines and appeared in several television broadcasts for demonstrations and interviews (Italia 1 Sport, Sereno Variabile on RAI2, Passioni on RAI2, RAI3,…).

He was part of several teams, of which we report the most significant:

He performed with this team in all the shows of 1996, including the week of June at the Sport Show in Genoa.

Massimo Bavieri Entertainment – With whom he made about fifty shows throughout Italy.

With which we remember the most important exhibitions: a week in Paris, one at the Bologna Motor Show in 2000 and a weekend at the Trieste Sport Show in 2001.

He carried out animation activities in France in Les Deaux Alpes in the summer periods of the years 2000, 2001, 2002.

In 1998 he was awarded by the F.I.H.P for his contribution to inline skating at the town hall of Todi on the occasion of the International Convention on Skating. The award was presented to him by Riccardo Di Lauro at the presence of the parliamentary representative Sabatino Aracu and all the authorities.

But his fame, still current, which covers him, is due to the exasperation of his deeds, as incredible as they are precise.

His most significant records are:

Twenty cones positioned at a distance of 80 cm in a time of 2.48 seconds measured from the first to the last "gobelet", with only eight meters of run-up.

Slalom with one leg backwards of 100 cones placed at a distance of 30 centimeters from each other.

In 2004 he made two DVDs about Styleslalom, available in Italian, English, and Spanish. They have been sold in various countries, including Brazil, Malaysia, Poland, Singapore, Spain, Canada, Russia. The third DVD of Inline Dance, available in all three languages mentioned above, is from 2008. It has also been distributed in Italy and Spain during various events in Udine, Verona, Turin, Rome, and Madrid.
Also, in 2004 he held, as a teacher, the first course for first level Styleslalom coach, organized by the FIHP in Riccione. 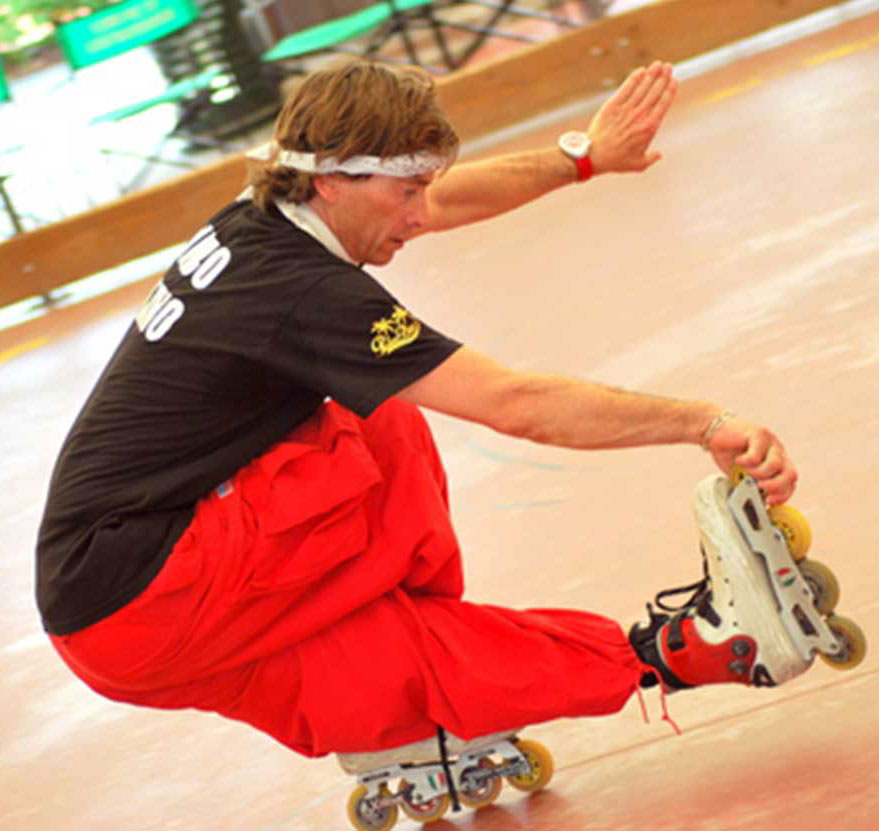 In 2005 he collaborated with ROXA to create a skate particularly suitable for Slalom, called X-treme.

His collaboration with F.I.S.R. dates back to 2002 when freestyle was recognized as an official discipline, thanks to Doctor Massimo Barsotti, with whom he drew up the first manual for judges on the description and difficulty of the steps known at the time.

He held the position of Technical Manager of the National Free Style Skating for two years.

He then became Meritorious Technician and Promoter of FreeStyle in Italy in 2011, holding promotional and educational internships in the Italian regions of Marche (August 2014 in Civitanova), Abruzzo (August 2014 in Martinsicuro), Puglia (April 2015 in Bari), Sicily (January 2015 in Catania), F.V.G. (September 2014), and Emilia Romagna (September 2014).

He taught for S.I.R.I. in the courses for Freestyle coaches of I, II, and III levels every year at the Olympic headquarters of the C.O.N.I. in Tirrenia and was a member of the Examining Commission until 2017.

He also held regional courses for coaches at the provincial offices of the C.O.N.I in Lombardy (Milan) and Sicily (Catania).

In 2013 the new Slide discipline was recognized by the F.I.H.P., for which he produced his fourth didactic DVD in which he introduces the terminology of the various figures and the rules for building new ones. This DVD was provided to the trainees of the coaching courses as study material for exams preparation.

In 2010 he published with Aurelia Edizioni the book “La Matematica applicata al Pattinaggio: STYLESLALOM, Teoria ed Esempi”, including a DVD with about fifty videos. Some of these videos have been made in collaboration with the members of the National team.

He held seminars at secondary schools (Scientific Lyceums of Lucca, Asti, Verona, Bergamo, Pordenone, Pomigliano d’Arco, Catania), at the CONI offices in Lucca, Lecce, Bari, at the Department of Mathematics of the University of Milan and of the Polytechnic of Turin, at the Summer School of Mathematics of Aosta (ALFACLASS, September 2019), at the International University Conference of Mathematics and Culture which was held in Venice in 2019 about topics reported in the book.

A detailed article, “A Mathematical Improvement of the Skate Curves” was requested from the Springer Publishing House, which published the book Image Math / 7.

He also contributed significantly to the Downhill discipline. 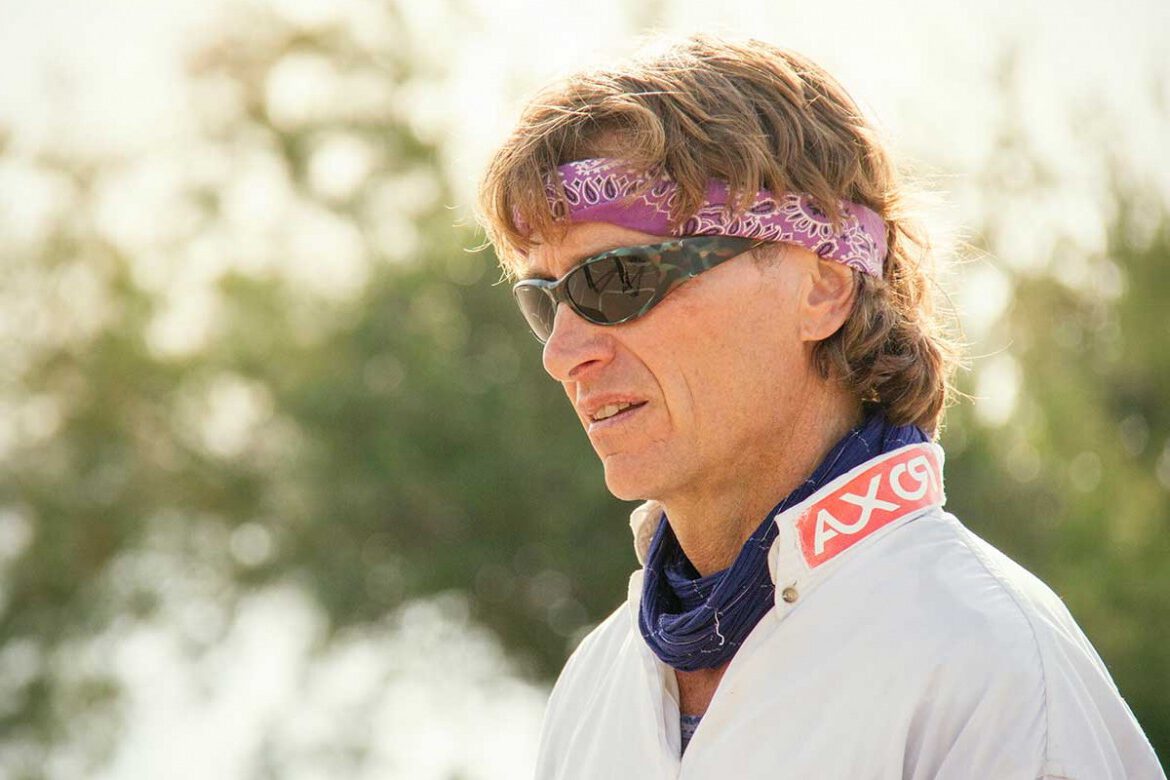 President of IN LINE PERANO A.S.D., he organized the Italian F.I.H.P. of Downhill, in 2012,2013,2014 in Cisterna d’Asti (AT), and in 2015 in Sant’Ambrogio di Valpolicella (VR). Since 2012 it has also organized a stage of the Downhill World Cup (I.I.D.A.) in Cisterna d’Asti, which in 2015 was recognized as a World Championship. In parallel to the Downhill competition, he organized an international downhill slide competition in Cisterna in which he participated that year (after 15 years of competitive inactivity), winning second place.

In 2013 and 2014, he also organized a stage of the I.I.D.A. in Isola Villa (AT).
In addition, he has held a teaching position in the courses for Coach of I, II, and III levels for the Downhill discipline, being part of the examining commission.

To know more you can read the true story of the roller engineer here.

The engineer of the Inline Style Slalom